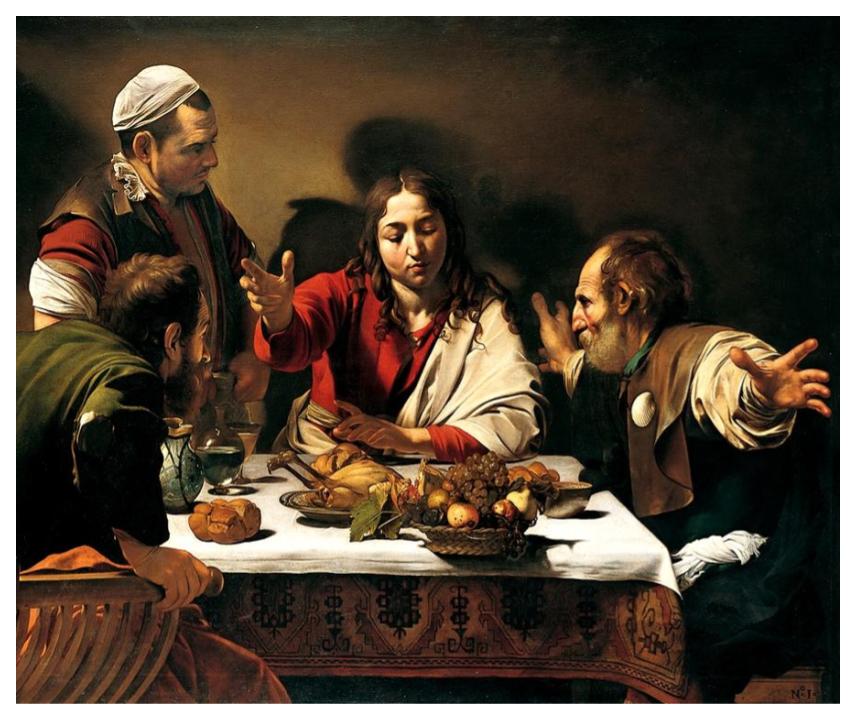 During this season of light, it seems appropriate to highlight one of the artists who captured light in his art: Michelangelo Merisi da Caravaggio (September 29, 1571 – July  18, 1610).

Or as he is more commonly known, Caravaggio.

His paintings, like Supper at Emmaus above, have become quite famous. As such, it’s easy and perhaps, natural, to look at his art through the lens of today. It’s easy to forget that until the time of the Impressionists and the plein air painters, oil paint didn’t come in tubes.

It’s also easy to forget that throughout much of history, people couldn’t read the written word: They relied on artists to teach them about life lessons through the pictures they painted and the sculptures they made.

And in the case of Caravaggio, people might forget that the world lived in darkness, literally. Electricity had not been invented. This is important to recall, because it speaks to how his work would have been seen when the artist unveiled his works.

As Milan Art Institute owner and instructor Elli Milan points out in a lecture about art history, up until the Baroque period, artists didn’t concern themselves as much with value and light, not even in the High Renaissance.

What Caravaggio brought to art was a mastery of light, shadow and values. In fact, his work is associated with a technique that the Baroque Period in art made famous: chiaroscuro.

But no art movement truly happens in a vacuum. The infusion of light during the Baroque Period echoed the sentiments of the religions of the day. More specifically, it was all about spiritual restoration.

A good portion of Caravaggio’s works were requisitioned by the religious leaders of his day and by the Church, which was going through its own form of restoration after the Renaissance. The art of the time served as a reminder of the Church’s and people’s restoration in Christianity.

While the age of Mannerism and the High Renaissance were different in many ways, both of them were marked by canvases filled with lots of people, angels, flora and fauna, cloud bursts, and particularly, in the case of the High Renaissance, lots of impressive displays of linear perspective.

The relative simplicity of Caravaggio’s compositions gives them the dramatic emotional complexity that they possess. Instead of paintings filled with the busy backgrounds that became so prominent in the era of Mannerism, Caravaggio’s paintings provided the viewer with areas of rest for the eye and in turn, rest for the soul.

And while some might argue that Caravaggio’s life represents anything but a restoration of spirit, there are others who disagree. Within his own paintings, Caravaggio examines his personal failings. He often put himself in his paintings, and in at least one painting, made himself the carrier of light.

It is hard to say if he would have ever changed the behaviors that made him as famous as a person as his paintings made him as an artist. After all, he did end up in jail and even killed a man once.

But in this Season of Light, his redemption (and ours) through the power of art is a nice possibility to think about.

Merry Christmas from all of us!

And the Milan Art Institute Team