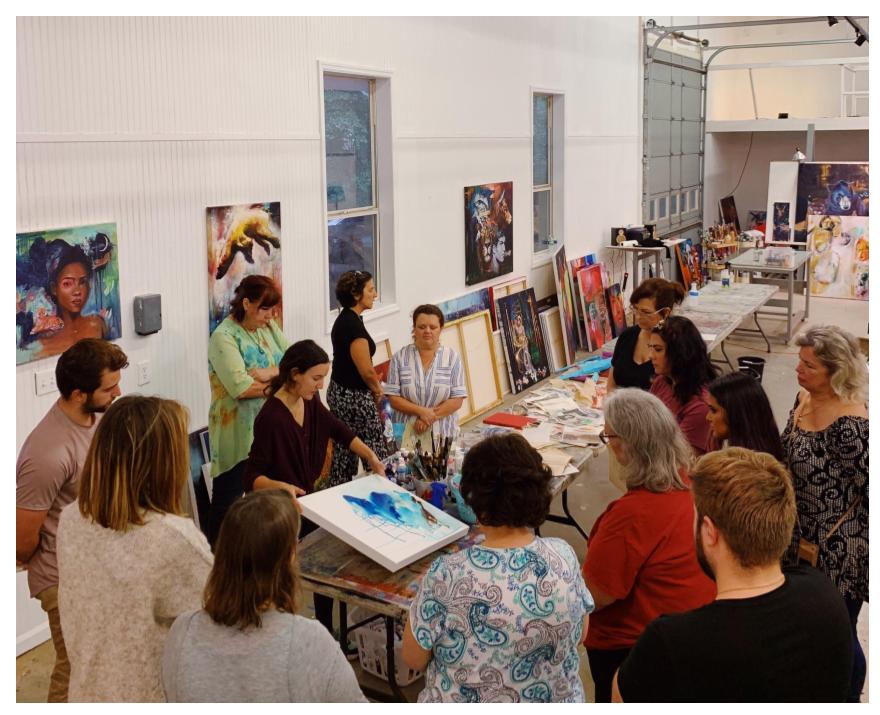 It’s an interesting thing to think about, particularly for those of you who are interested in becoming a professional artist.

But what if your idea of failure is wrong? What if your failures were actually your keys to success? What if you could NOT succeed if you DIDN’T fail first?

It’s an interesting idea, isn’t it? It’s one that Jake Dunn, the Director of the Milan Art Institute’s Art Club, explored with MAI owner, Elli Milan.

What she has to say about her own failures in the art world may just inspire you to move through your fears of failure and catapult you into becoming the professional artist you want to be.

Elli on Overcoming the Fear of Failure in her Art Career

Jake: So, Elli, you have had a very long and tenured career as an artist. I’m just curious. Have you ever failed?

Elli: I will say, no, I have never failed, not even once.

Jake: How can you say that? And what do you mean?

Elli: Well, I strongly believe in the old adage that you fail your way to success. And in my mind, I haven’t ever failed, because all the times that I have failed, they’ve been tremendous learning experiences. They’ve been something that has deepened my perseverance and my desire for success.

You name it. It has been to my benefit. And in the end, my greatest failures have been my greatest successes.

In 2008, we [she and her husband, John Milan] were really successful artists. We were selling our artwork all over in tons of galleries all over the world. We were on the cover of magazines, too, you know, things were going well, and then in 2008, the economy tanked.

We were not impervious to it. We had sort of all our eggs in one basket with one dealer. That dealer was hurting financially, because he wasn’t getting paid by the people that were supposed to pay him. It set this chain of events where we suddenly lost our source of income. We lost our outlets.

Art was not being sold [at that time]. If you look at what was happening in 2008 and 2009 in the art world, art sales literally tanked. Art just was not selling, especially in our price points.

And then when art did sell, there were gallery owners who owed people money, and basically, the food chain got stopped up and the artist was the last one to get paid. Even though art sales were down, when art did sell, we never got the money. Literally, people stole from us.

Over time - it took about two years - we lost everything. We lost our house. We lost our cars. We lost EVERYTHING. We were the brokest we have ever been.

We saw our failures very glaringly at the time. We saw that we didn’t position ourselves well. We saw that we had debt. Like everyone else, we had credit cards and cars and houses with debt. We didn’t live by cash.

We were not in a good position. We weren’t wise with our choices and our money. Even though the economy was out of our control, our positioning was 100% within our control.

What I most importantly failed in was my identity, in my attitude. My whole identity was wrapped up in being an artist. The thought of having to get a job and to work outside the art world, I realized, shattered my entire identity.

Each one of those things was taken away from me. Basically, in every way, I had failed. I failed in my business. I failed in friendships. So many things got ruined at that time.

And what happened is my identity began to shift. And I started to realize that art is just a vehicle and being an artist is just a vocation. It’s not my identity, and that my identity is much richer and deeper than that. And it’s reflected in other things.

The Path to Becoming a Professional Artist Is a Winding One

That [realization] made the hugest difference in my life. I suddenly didn’t care about owning a house. It didn’t define me, and it wasn’t my identity. It didn’t make me better than other people. All these arrogant and prideful and stupid ideas that I had sort of vanished.

That’s when I started the art school after I came out of it [the Recession] in 2010. It was the beginning of me finding my true destiny.

It was literally a gift. It wasn’t something I had planned or wanted. It was something I just knew I had to do. It was sort of asked of me to do. It’s when I opened the art school [and ultimately, the Mastery Program]. It’s when I shifted my art career into not relying on a dealer.

The biggest failure in my life actually put me onto purposeful living where I didn’t live for myself and my own identity and my own success. I actually lived for a higher purpose and paid attention to what my destiny was in God, in my higher purpose.

I actually cared a lot more about helping other people fulfill their dreams than fulfilling my own dreams.

How Elli Stopped Being Afraid of Failure

But the irony there was that I managed to fulfill my dreams by helping others fulfill their dreams. So, the biggest failure in my life has actually been my greatest success. It shaped me and molded me into a better person.

Obviously, I still haven’t arrived. I need lots of improvement still. I’m not all the way fixed, right? But it definitely shifted things.

I think if we look at our failures in that light, and we take them as opportunities to move into deeper greatness, that we’ll feel like nothing is a failure. It’s all about are you willing to learn from your failures? Are you willing to allow it to shift? Can you actually be wrong?

When failure happens, can you look at it and go, “This is information. What information do I need to get from this?” It takes humility, I think, to not resist that failure but to move into it to allow it to shape you and to allow God to hone you and mold you and to bring you closer to God’s image so that you have more of a God-like character.

So if you face the fear of failure, realizing that if you fail, you’re just closer to your success. It’s not actually failure. There’s no such thing as failure if you approach it right.

Final Words on How to Overcome the Fear of Failure

To hear Elli Milan talk about it, failure and success are really just two sides to the same coin. She learned to look at her past failures as feedback. She learned to ask “What is this situation trying to teach me?”

In the process, she birthed a whole new life and a new direction for her art career. If you’re thinking about becoming a professional artist, it’s important to look at your failures in this way. They’re not failures at all. Rather, they are just the stepping stones you need to bring you to your greatest victories.

If you want to hear more of Elli’s insights, as well as to hear Dimitra Milan Dunn’s and Jake Milan’s advice on how they overcame the fear of failure, be sure to listen to the whole podcast.

Why Study Art? A Case for Arts Integration and Visual Literacy

How to Become a Professional Artist: Taking Part in Artists Sunday