Art History: Why Giotto Was the First Real Artist 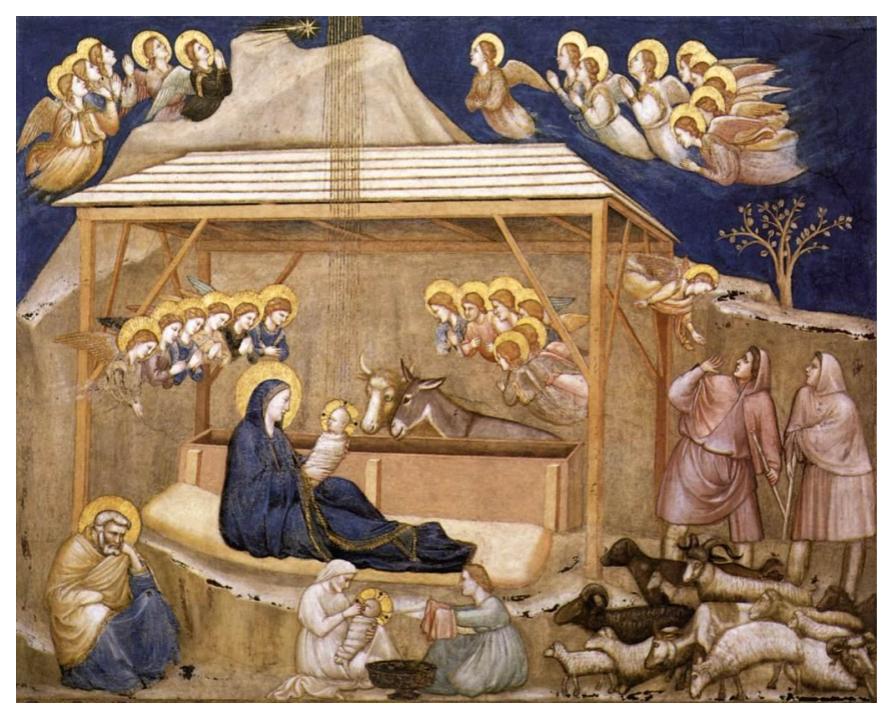 Photo caption: Giotto’s The Nativity in the Lower Church was filled with emotion and expression, something that was not previously seen in art. Photo public domain.

Elli Milan, one of the founders of the Milan Art Institute, has a name for when the direction of art takes a new turn: divergences. These are places where the trajectory of art changed in some way, taking art and subsequently, art history, into new directions.

Although many artists qualify as having created divergences in art, Giotto may have been the first who deserves the title. Within his work, expression and emotion came alive in a way that had never been seen previously.

Here’s what Elli had to say about Giotto’s work in an MAI Art Club talk with MAI co-founder Dimitra Milan.

Who Was Giotto and Why Was He Important to Art History

Giotto, or Giotto di Bondone, was born in the 13th century in Vespignano, Italy. Believed to be the mentee of the Florentine painter, Cimabue, art historians have called him the father of European painting. His contributions to painting hinted at the innovations that Renaissance painters would make in art a hundred years or so later.

As Elli Milan said in the Art Club lecture, “I think Giotto is the first artist. He was famous. He had his name, his celebrity attached to his art. That’s what brought about the da Vincis, the Michelangelos, the Raphaels into the Renaissance, where the artist became the genius or the celebrity.”

Video caption: Giotto’s technique for painting revolutionized painting in his day. His works were both masterful in their technique and their expressiveness.

Previous to Giotto’s work, the artists of his day were more craftsmen, who might have created manuscripts or ornamental objects. According to Elli Milan, Giotto counts as the first artist to really insert his own personal expression into art. This element of art - that is expressiveness - is really what we associate with art today.

How Giotto Was Discovered

Giotto was a young shepherd boy in the fields with his sheep, and to pass the time what he would do is take charcoal from the fire and begin drawing his observation of the sheep on rocks.

According to Milan, an artisan who did frescoes for churches and cathedrals saw him and his drawings one day while out for a walk. The artisan saw such emotion and personal expression, he was captivated by them. He was really gripped by Giotto’s work, which showed great mastery and powerful and captivating emotion.

Giotto eventually earned a place in a master artist’s studio (believed to be Cimabue), where he learned how to create frescoes.

“That’s what started basically the close of the Dark Ages, and it opened the crack of the door into the Renaissance. If it wasn’t for Giotto and his personal expression, his sort of divergence, the Renaissance probably wouldn’t have come about,” says Elli Milan in the Art Club talk.

What Set His Work Apart From His Contemporaries.

In Giotto’s work where he portrays the burial of Christ, he shows the anguish of Mary, the mother of Christ. Her anguish is very real, very relational, very emotionally charged. However, before that, the depictions of Mary were felt slightly detached and unemotional.

Giotto’s art, because it was so emotionally charged, so full of expression. It really gripped people. It depicted a more relational aspect of spirituality versus a religion that was rote and non-personal.

Video caption: Cecilia Frosinini on Giotto at the National Gallery of Art

Knowing about art history empowers artists to identify their place in art history and to take part in and shape the conversations about art in society. That’s one of the reasons why students in Milan Art Institute’s Mastery Program are encouraged to continue studying art history after they graduate.

Art history is filled with artists who created divergences in the art world. Art students who understand their role in art history know how to turn their hard work and determination into mastery.

They are the artists who will ultimately create more divergences in the art world for years to come, allowing them to transcend their own time and leave their mark and change the world.

If you’d like to get a more unique understanding of art history, sign up for Art Club to see the rest of this talk between Elli and Dimitra Milan or become a student in the Mastery Program, a college-level art certificate program.

3 Revolutionary Steps to Create Atmosphere in Your Paintings

Young Artists in Action: How Art Helps Teens Know Themselves