Surrealist Art: What to Know About This Art Movement, Pt 2. 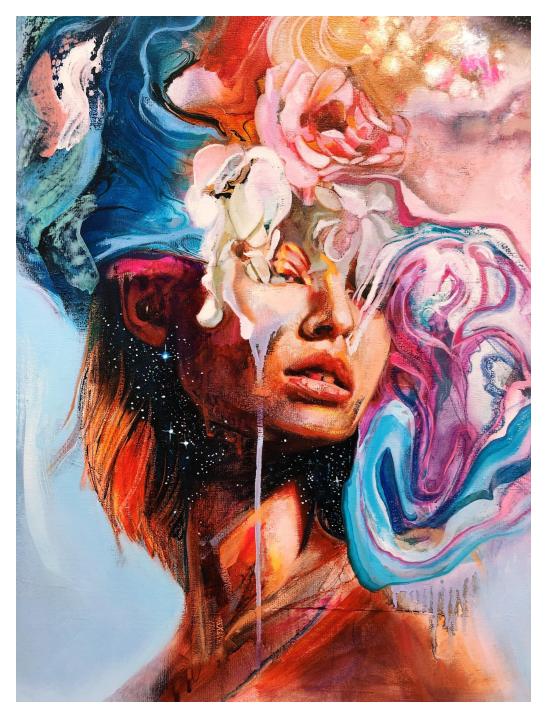 Photo caption: The Surrealists of the 20th century paved the way for modern Surrealists, like MAI’s Dimitra Milan. Photo courtesy of the Milan Art Institute.

Looking to the past allows us to see our future and, as artists, we can learn so much about the ways in which new ideas are birthed by studying history. This allows us to discover how our own ideas can take form and impact the world. Today, we continue our study of Surrealism.

Surrealism arose at a time when the world had fallen into turmoil. The ravages of war and the constant changes that marked the 19th and 20th centuries, as well as the discoveries of social scientists like Sigmund Freud, sparked this famous art movement.

In Wednesday’s blog post, we discussed the origins of the movement, its inspirations and some of its elements. In this post, we’ll be taking a closer look at the artists who were and are the major players in the Surrealist movements.

Finally, we’ll talk a bit about how modern Surrealists fit into art history and how 21st century Surrealist painters can make their own mark on the art world and art history.

Who Are Some of the Major Surrealists of Yesterday and Today?

While Surrealists like Dali get quite a lot of attention, Dali is only one of many. Some artists, which people labeled as Surrealists, actually didn’t consider themselves Surrealists at all.

This section is intended to offer MAI students a small introduction to some of the major Surrealists. However, we would encourage them (and you) to do more independent reading about artists whose work is appealing to them personally.

Salvador Dali and the Melting of Time

Born Salvador Felipe Jacinto Dalí y Domenech (May 11, 1904), this artist’s painting of melting clocks, called The Persistence of Memory, made Salvador Dali one of the most famous painters of all time. His artistic leanings showed themselves early in life, and due to his talents and interests, his parents eventually created an artist’s studio for him before he entered art school, according to Biography.com.

In the 1920s, he studied art in Madrid, Spain at the Academia de San Fernando and eventually became acquainted with other big artists during his time, like Pablo Picasso and Rene Magritte. Even in his early adulthood, his eccentricity began to show itself.

Dali grew his hair long and delved into subjects, like Cubism and Metaphysics. It was during art school that the artist also began to study classical painters like Diego Velazquez and Raphael.

Dali’s brush with Surrealism began in 1929 when he began painting small collages filled with images that represented his dreams. During this time, Dali also explored Surrealism in film. Dali painted his most famous painting The Persistence of Memory in the 1930s. It explores the idea that time isn’t set and that nothing in life is safe from destruction.

Video caption: Learn more about Dali’s life and work in this piece: Surrealism The Big Ideas.

Frida Kahlo: The Surrealist Who Wasn’t

Frida Kahlo was born on July 6, 1907. Many art historians label Kahlo as a Surrealist painter, though she didn’t consider herself a Surrealist. She explained that she wasn’t painting her dreams when she painted the fantastical images on her canvas. Rather, she expressed that her art was her real life.

Kahlo’s work has also been labeled by some as Magical Realism, a style of art that is neither fantasy nor realism but somewhere in between. https://www.1000museums.com/frida-kahlo-art-magical-realism/

Her work features images that celebrate her native Mexican culture, little animals and often her own face. They also portray the pain she felt for much of her life. According to FridaKahlo.org, she had polio when she was six years old and as a result, was confined to bed for nine months. Polio left her right leg and foot weaker for the rest of her life.

When she was a young adult, she was in a serious bus accident that caused spine and pelvic injuries as well as lifelong pain. This pain showed up in works like The Broken Column, which depicted her spine as a broken column hidden within the depths of her body.

Vladimir Kush and the Surrealists of Today

Born in 1965 in Moscow, Russia, Vladimir Kush’s work represents the direction that modern Surrealism has taken. One of the reasons why his work is so notable, according to Elli and Dimitra Milan, is that his work is more optimistic and is missing the dark, almost creepy quality that the work of the Surrealists of the past included.

Kush studied art at the Surikov Moscow Art Institute. He began exhibiting his work in 1987. A good portion of his income during that time came from doing newspaper caricatures and portraits. In 1990, he had his first foreign exhibition in Germany.

Eventually, Kush moved to the United States, establishing himself through his gallery work. He opened his own gallery in Lahaina, Hawaii and is today one  of the most prominent modern Surrealist artists working today.

Surrealism made an impact on art history, because it was a movement that allowed “chance” elements to appear in paintings. However, as Elli Milan pointed out in an Art Club talk recently, modern artists working with surrealistic elements have more freedom than traditional Surrealists, meaning that while she, Dimitra and other modern artists might have surrealistic elements in their work, they are not bound to them.

If you’d like to hear more about Elli and Dimitra’s thoughts on Surrealism, think about signing up for a free trial membership to Art Club. This social learning platform features art talks, like the one that inspired this post, about art history, art techniques and professional art practices.

Read More About Art History Below

Art That Changed the World: The Freedom From Want