3 Things To Know About Picasso, The 20th Century’s Premier Artist 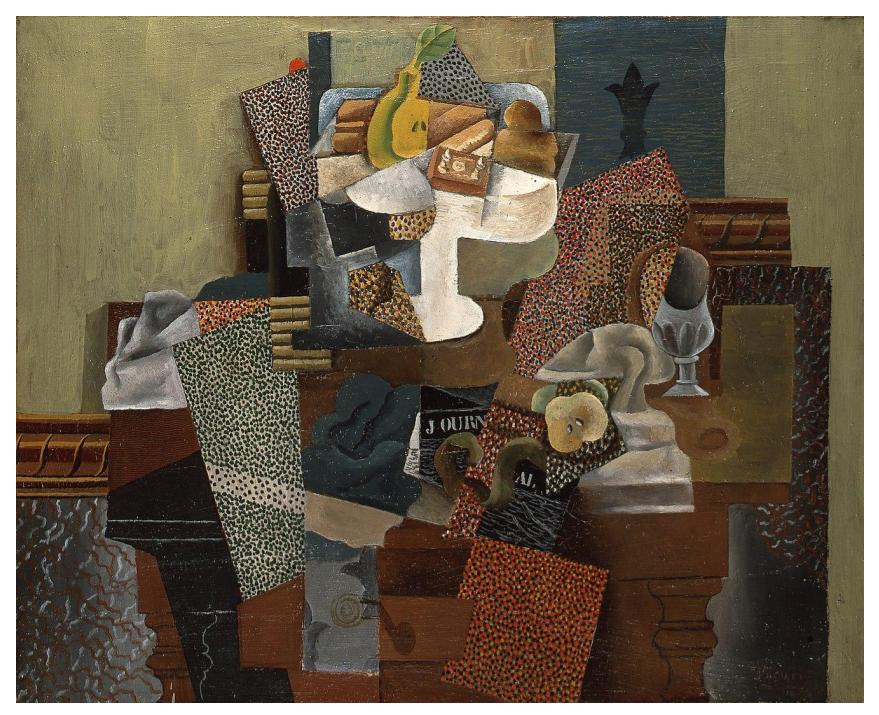 Photo caption: Pablo Picasso’s painting Nature morte au compotier is an example of the artist’s Cubist style, a style which he helped to originate. Photo courtesy of Wikipedia.

The study of art history: It’s like a window into the souls of those who have lived before us. It’s a small glimpse into their daily life, their feelings, their thoughts, their world. It’s a part of who we once were and what has shaped us into what we are now. It’s invigorating!

Take a journey with us and let’s look at Pablo Picasso, probably the most influential artist of the 20th century and an important figure in art history.

Who is Pablo Picasso?

Pablo Picasso was an artist born in Spain in the late 1800s. He began creating art as a child and continued until his death in the 1970s. His father was a painter and professor of art. Picasso began receiving formal art training from his father at the age of seven. His father believed that his education should begin with copying the masters and learning their techniques.

When Picasso was 16, he was admitted into Spain’s foremost art school, the Royal Academy of San Fernando in Madrid. It didn’t take long for him to feel confined with the formal education. Not long after he had started, Picasso quit school and spent his days inside Madrid’s Padro (art museum) studying the paintings there.

Picasso eventually moved to France where he spent most of his adulthood. His first visit to Italy in 1917, was transformational for him.

Picasso’s Visit to Italy and Neoclassicism

He moved from the modern style of painting to a style similar to the Renaissance painters, Raphael and Ingres. Its “return to order” style included a more classical dress and fuller figures. One of his best known pieces, Two Women Running on a Beach, portrayed two full figured women running with arms extended and hair flowing all against a vivid blue sky. It has been said that this painting spoke of his desire that life would be full and not filled with war and destruction.

Another piece that he created during this period, Guernica, was a large mural reaching 11 feet tall and 25.6 feet wide. It was a combination of his modern style and classical skills. The entire piece was painted in black, white, and blue that helped create the effect of the anguish and hardships of war. It was an anti-war, political statement as well as a magnificent piece of art.

Picasso’s Impact on the World of Art

Picasso was well-known and followed as an artist. As we stated earlier, he had made a huge impact on the world with his art. We’d like to focus on a few of them.

During Picasso’s first trip to Italy, he stole the style and techniques of Raphael and Ingres and other master artists. He shifted his style and created pieces that were similar to these masters. But he didn’t just copy their work, he used them as springboards to create his own style mixing the modern with the classical.

As he studied the works of so many other artists, he kept pushing the envelope, innovating new methods and creating new tools. He was loath to be just status quo. His curiosity was insatiable. It led him to constantly reach for something new. It was evident in his quote, “The purpose of art is washing the dust of daily life off our souls.” His art pushed through the mundane into the world of possibilities. His Cubist paintings are an excellent example of this.

He had a part in inventing both oil pastels and collage. He wanted to use so many different materials in his art that he was bound to create new things.

3. He Was Dedicated and Hard Working

It is said that he created over 50,000 pieces of art in his lifetime. Seriously, that is an extraordinary, jaw-dropping amount of work. His art was NOT a hobby. He worked at it—diligently, consistently, aggressively. That would be one bodacious goal, wouldn’t it? Think about it. It’s clear why he had such an impact. His art was his life!

It was both his revolutionary drive and his classic traditional skills combined that made Picasso so powerful in the art world. He was an amazing example of someone who studied historical artists while infusing his own style with what he learned from these masters’ techniques.

He was keenly observant and wildly imaginative—and brave enough to walk into the unknown.

Who are your favorite artists in history? What skills and techniques of theirs have you learned? How have you melded those skills with your own style?

Want to Learn More About Art History? Check Out These Links…

3 Da Vinci Drawing Tools You Might Not Know About

Back When Art Used to Be an Olympic Sport